The thrill of watching a Royal Bengal Tiger in its natural habitat is an amazing sight in itself. Or maybe the Jungle King himself and his entire pride, out by the waterbody quenching their thirst, can be the edge of the seat kinda experience you’re looking for. Their piercing eyes warily surveying the surroundings, their stealth movements and their busy tongues skimming through the surface of the water.

All of this freezes the moment and leave onlookers in a state of trance. Did this vivid explanation just send a chill down your spine? If you felt it then simply don’t deny these urges of exploring wildlife’s marvels in their habitats. India’s calling!

India, for its lavish reserves of wildlife and natural vegetation, has always remained a favorite destination for wildlife enthusiasts from all over the world. Hundreds of students travelers, volunteering activists, and animal lovers make a routine of visiting these parks during their travels in India.

There are also instances of gap year travelers delving deeper and taking part in the maintenance of these luscious reserves and the wildlife diaspora in these National parks and sanctuaries in India. If you have been planning your India travels along the lines of something like this then our programs at Volunteering India would be the perfect means for you to make the most of your experience in India.

Here are the names of a few of the best amongst the list of Indian National Parks each showing reasons why you must visit them the next time you find yourself in India. 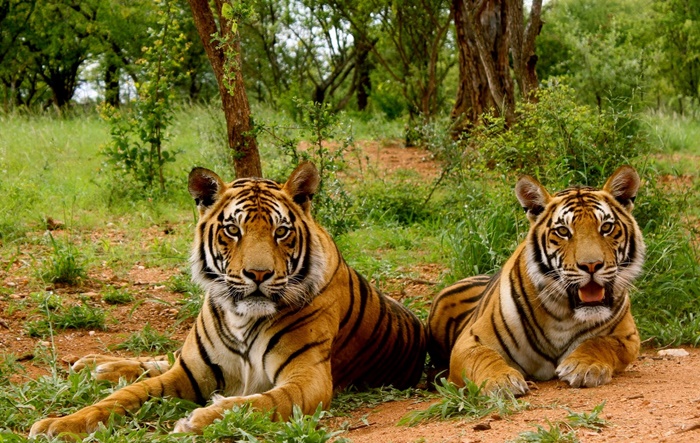 Dating back to 1936, it started off as The Hailey National Park and is the oldest national park in India. It was later named after Jim Corbett to honor his noble efforts for saving India’s wildlife and for his efforts in the establishment of the park. Located in the Nainital district of Uttarakhand, Corbett’s flora and fauna species are currently numbered at a whopping 600+ and 450+ respectively.

From the majestic striped tigers roaming free in the savannah to the frequent spotting of the several species of Deer, Leopards, Sloth Bears, Monkeys etc. It is all “THE” destination for birdwatchers given that the official records put the number of identified bird species at a surmounting 586. Other than this it is also home to some exotic species and about 200 tigers and 300 wild elephants.

It is also one of the thirteen protected areas under World Wide Fund for Nature under Terai Arc landscape program aimed at protecting 3 of the 5 terrestrial species namely Asian elephants, Tigers, and one-horned rhinoceros. Owing to this many areas are cordoned off for creating linked corridors for wildlife migration between the protected areas of Nepal and India.

The perfect time for a visit to the Corbett national park is from mid-November to March.

Getting there- Well connected by roads and railways from the capital of Delhi, Nainital etc.

Activities- Jeep ride through the forests, animal spotting, treks around the park. 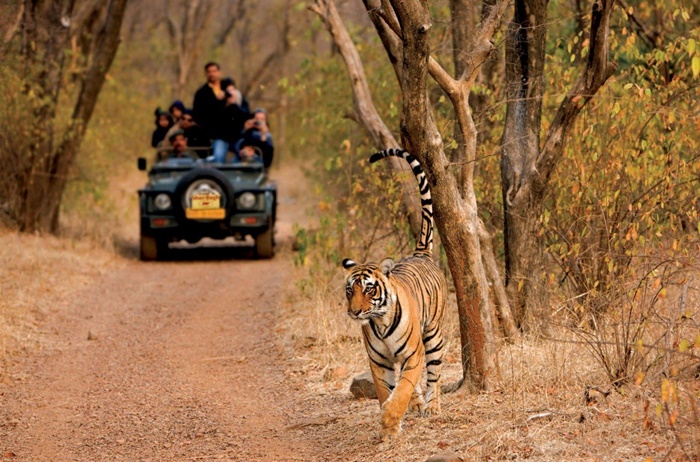 The arid lands of Rajasthan hold nature’s marvel in the form of Ranthambore National Park. Located in Southeastern District of Rajasthan, it is one of the largest national parks in India and naturally one of the most popular as well. Best known for its reserves of Royal Bengal Tigers, the park is overrun by intrepid travelers and wildlife adventurists to witness the regal creature in its natural habitat. Most of the footfalls are during the months of November and March which has been declared as the best time for tiger sighting.

Apart from its sanctuary of Bengal Tigers, the park is also known for its reserve of Indian Leopards, Nilgai, Sloth Bear, Rhesus Macaque, Chital, Mugger Crocodile etc. The park is characterized by deciduous forests typically found in Central India. Apart from a wide variety of animal species, the park also plays host to various plant species and also is known as the home of one of the largest banyan trees in India.

Did you know? There’s a popular documentary called Broken Tail named after the late queen tigress Machli’s grandson, whose own life story is worthy of an entire play on the Broadway! It received critical acclamation for unfolding the journey of broken tail leaving the reserve and wandering off to Darra and also unfolds the tale of his untimely demise due to a fatal train accident. Not only has it bagged some many prestigious film awards but have also been aired worldwide in channels like BBC, PBS, CBC etc.

Getting there– The district of Sawai Madhopur ( the district where it is located) is well connected by roads. The capital city is the best place to start from. There are multiple options of road transport as well as trains that can connect you to Rajasthan and then a small road trip from there.

Activities– Gypsy Safari, Kachida Valley, visit the Ranthambore Fort which is inside the reserve as well. 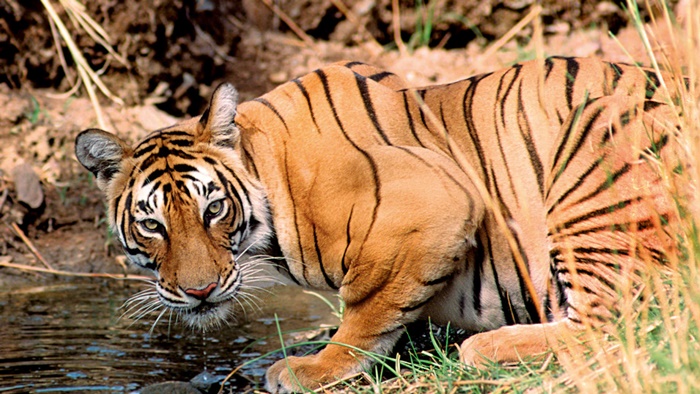 A national park, tiger reserve, and biosphere reserve, all put together into one, Sunderban has been popularised as one of the natural wonders of the world and have also been given the recognition of a UNESCO Heritage Site. Partly located in West Bengal, it shares an International border with India’s neighbor Bangladesh. A huge chunk of the mangrove wonder is located in its districts as well.

From relaxing on a steamer, soaking in the goodness of some sun to the thrill of finding a Tiger or a saltwater crocodile peeking through their natural camouflage can be a fanatical moment for any wildlife traveler. Do not be disheartened if the moody man-eaters do not grace you with their presence for there are many other things to make your trip memorable.

From the deep creeks and caves stretching out into the unwinding mangroves to spotting creatures like Leopard Cats, Indian Grey Mongoose, Flying Fox, Jungle Cat which are found in abundance, The Sunderbans will remain as one of the treasured memories of your trip to India. Away from the urban chaos and into the lap of nature, the months of November and March are said to be the perfect time to visit the National Park as chances of tiger spotting are higher during this time.

Getting there– The park remains open through the months of September to February. A small road trip from the city of Kolkata (West Bengal) to Canning where from you can avail steamers and motor boats which is the choice mode of transport when it comes to exploring Sunderban.

Activities– Visiting the many parks in and around the reserve, Mangrove exploration, sighting of the Rare Bengal Tiger Species that is found swimming in saltwater.

Located in the ‘Heart of India’(Madhya Pradesh), it is primarily a tiger reserve where if you’re lucky you’d get to see some beast on beast and wild on wild action for yourself.

Apart from its several species of Tigers, Leopards, and Wild Cats, the Kanha National Park is also famous for its reserve of Barasingha, Indian Gaur (the largest animal in the reserve), Nilgai, deer and the many species of birds. Blackbucks though considered extinct in the park has currently resurfaced in a fenced area as well. It is also home to some savage reptiles like King Cobra, Vipers, Indian Pythons etc. Its expansive variety of species and interesting spread of fauna makes it a must visit the national park when exploring the wildlife of India!

Did you know? It has been said that the jungles depicted in Rudyard Kipling’s famous Jungle Book which we all have grown up with are based on the jungles and animals of this particular national park. Take a stroll through the famous jungles where Mowgli roamed with Baloo and Bagheera and faced off with the infamously famous Shere Khan. How about that for a reason to visit the Kanha National Park next time you’re in India?

Getting there– The months of November continuing on until June is considered to be the perfect time for a visit to the park. The Kanha National Park is well connected by roads from Nagpur and Jabalpur. 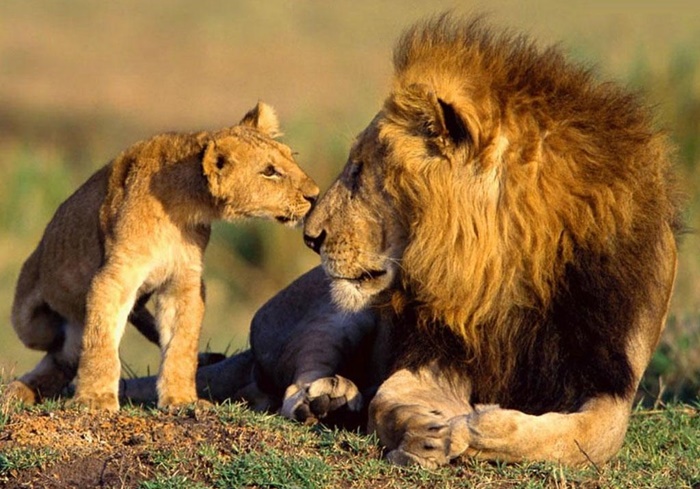 Located in Talala Gir, Gujarat the larger portion of the total area of the park has been kept aside as the fully protected region while the remaining half has been maintained as the sanctuary.

Apart from its Royal Indian Legacy, as once it was hunting grounds for the Nawabs of Junagadh the national park is also famous for its legacy of the Jungle Royalty as well. It is the only home of the magnificent Asiatic Lions and the only place where they are found free, roaming the wilderness which further ups its attraction factor. December-March is considered the best time to visit the Gir Forest National Park.

With over 300 bird species amongst the whopping number of fauna species, it is also a good place for birdwatchers in India to up their birds sighted count. Apart from Lions and birds, the park is also home to Indian Leopards, Striped Hyenas, Golden Jackal, Porcupines, Mugger Crocodiles etc.

Getting there– Well connected by roads from Rajkot and other big cities of Gujarat, your wildlife adventure is just a road trip away.

Activities– Jeep Safari, watching the Asiatic Lions in the wilderness. 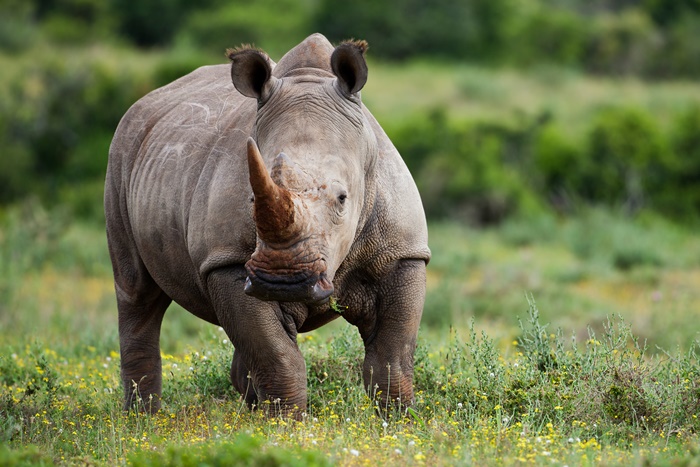 Home to world’s 2/3rd of the entire population of the Great One-horned Rhinoceros it has been recognized as one of the UNESCO World Heritage Sites. It is located along the edge of Eastern Himalaya Biodiversity Hotspot making it one of the most diverse and visible national parks in the country.

Another attractive point of the Kaziranga National Park is the substantial number of Bengal Tigers, namely largest in the country and highest in any designated sanctuary or protected park in the world. That being said, this number is further towered by the large breeding amounts of elephants and wild water buffalos.

From its bountiful savannahs to its long winding historical background, Kaziranga located in the Golaghat and Nagaon districts of Assam has become a hotspot for travelers looking for a chance to explore the zoological heritage of the region and also the world-renowned reserve of wildlife.

Getting there– Kohara is the closest town and it is easily connected by roads. Trains are easily available to Assam from any part of the country. From then on it’s an exciting road trip ahead!

A visit to India means an exciting opportunity of following the tiger trail across the many regions of the country. A visit to these national parks out of the hundreds can be the perfect way to satiate the wildlife explorer and adventurer in you. What’s more, you might just get the chance to work in the wild with some gentle beasts while absorbing the natural beauty of the country. So what are you waiting for? Book your spot with Volunteering India TODAY and we’ll be with you every step of the planning!