You will certainly have a lot of things lined up, while you are on your volunteer trip to India. But you can surely take some time out to see these Buddhist Monasteries, where people from all corners of the world come in search of peace.

The Monasteries are considered to be extremely holy and sacred places, and their architectural beauty and the melody of the chants will never fail to give you goosebumps.

Let’s take a look at the 12 most beautiful monasteries in India:

Tawang Monastery (Galden Namgey Lhatse) is the largest monastery in India and the second largest in the world, situated at an approximate altitude of 10,000 ft. It was founded as per the wish of the 5th Dalai Lama, in the year 1680.

The monastery has the capacity to shelter 700 monks, and a 3 storey library that secures two of the most ancient scriptures of the world – Kangyur and Tengyur. 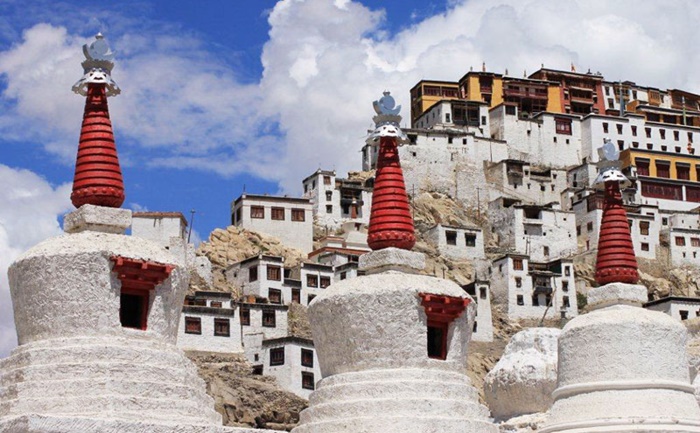 Built sometime around 15th Century AD, Thiksey Monastery is situated at an altitude of 11,800ft, 20 km from Leh.

The main attraction of this monastery is it’s fairytale-town-like appearance, with several small buildings that are placed in ascending order and are whitewashed to give it a magical look. There’s also a 49ft tall statue of Maitreya Buddha that was built to commemorate the visit of the 14th Dalai Lama in 1970. 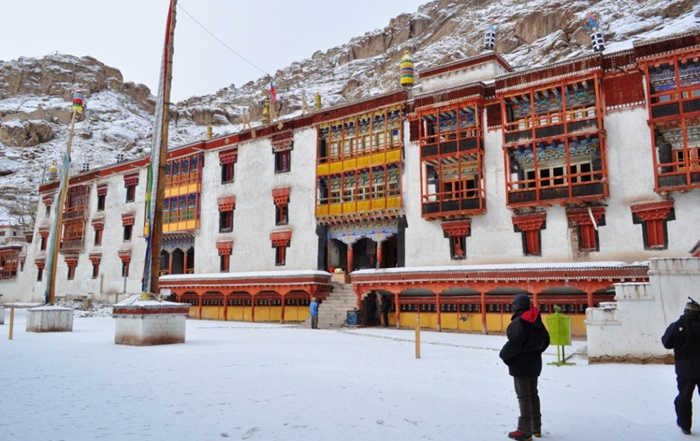 Located at a distance of 47 km from Leh, Hemis Monastery is considered to be the largest and the wealthiest monastery in this region. The history of this monastery dates back to the 11th Century AD and shares its root with Naropa, ancient Buddhist pupil, who had achieved enlightenment in Hemis.

The best time to visit this monastery is June-July. During this period, you can also witness the famous Hemis Festival, organized as a dedication to Guru Padmasambhava. 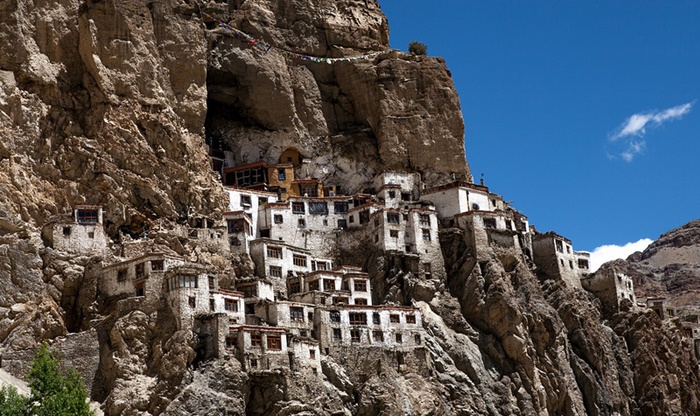 The entire monastery is built on the mouth of a cave and hence the name Phuktal was given to this monastery. ‘Phuktal’, in the local language, means ‘through caves’. There’s a suspension bridge to reach the monastery, making the sight more wonderful and a proper destination for the ones who love trekking.

Founded in the 12th Century AD,  the monastery remained undiscovered to the outer world till 1826-27 because of its extreme location. 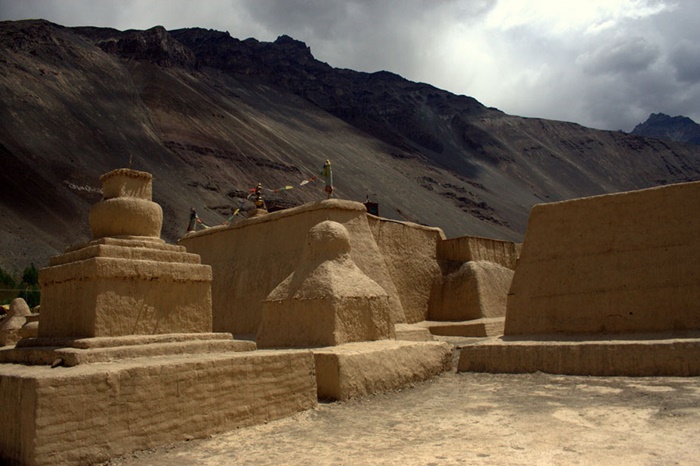 It’s one of the oldest monasteries in the country, that was established around 996 AD, and is famous for the ‘meditation caves’ that are dug into the mountain by hands.

Most of the parts of the monastery are filled with paintings including walls and ceilings.

Situated at an elevation of approximately 10,000ft, May-October is considered to be the ideal time to visit this monastery because the Rohtang pass remains closed due to the heavy snowfall in October. 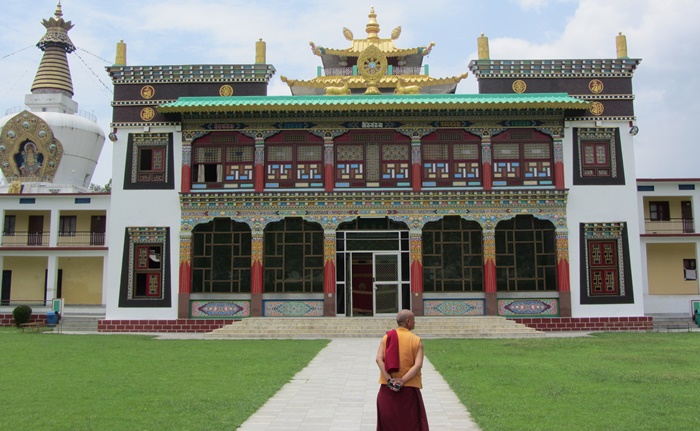 Located in the foothills of the Himalayas in Dehradun, this monastery was founded in 1676, and it’s an ideal center for learning Buddhist scriptures as well as other academic courses.

In the year 2002, the monastery opened its door to the ‘Great Stupa’, which is 185 ft tall and the width measures up to 100 sq.ft. It is the largest stupa in the world. 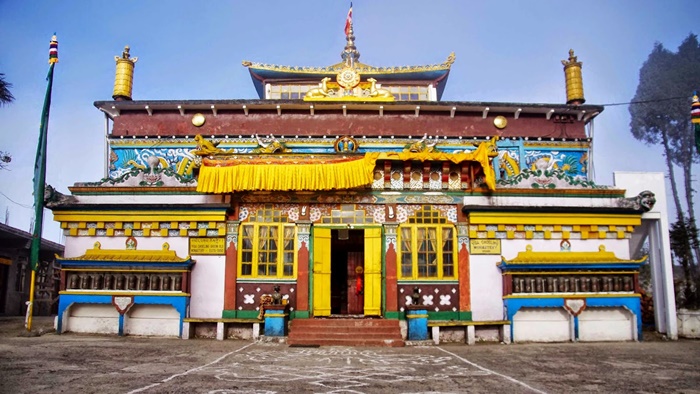 Famous as the Yiga Choeling Monastery among locals, this is one of the most favorite destinations of travelers visiting the hill town of Darjeeling. Built in 1850, the Ghoom Monastery stands at an altitude of 7,470 ft and houses the 15 feet high statue of Lord Buddha made of gold and precious stones.

If you are lucky enough, you might get a splendid view of the snow-capped Kanchenjunga from the monastery premises. 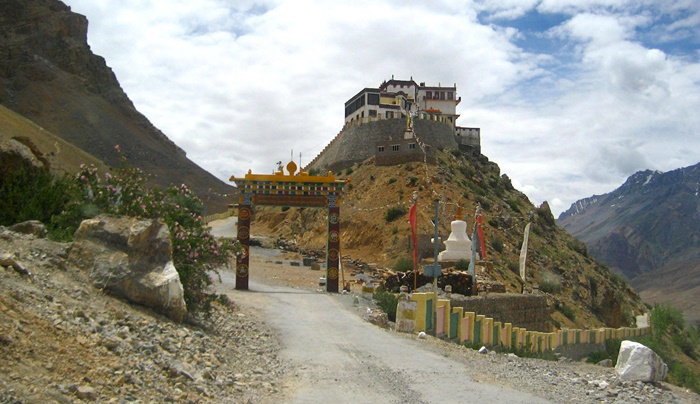 Located at the sacred junction of Chandra and Bhaga rivers at an altitude of 10,370 ft in Himachal, this monastery dates back to the 8th Century AD.

It’s a 7 storey tall monastery, with alternative storeys of bricks and timber, and houses huge wooden statues of Guru Rinpoche, the founder of Gondola Monastery. 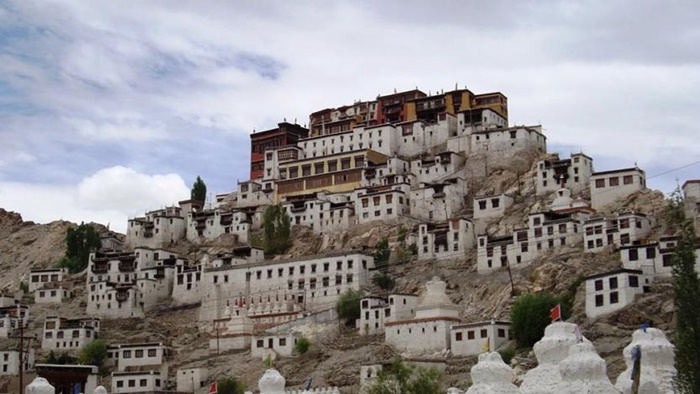 Built in the 11th Century AD at an elevation of 13, 668 ft, the Kye Monastery is decorated with beautiful paintings and murals, thangkas (a typical banner with Tibetan painting), valuable manuscripts, prayer bells, and unique wind instruments.

The monastery was frequently attacked by the Mongols and looted by various armies, followed by a devastating fire that caused huge damage in the 1840s. In 1975 a violent earthquake caused further damage to the building.

In spite of the repeated attacks, frequent renovation and reconstruction have helped Kye retain its beauty and charm. 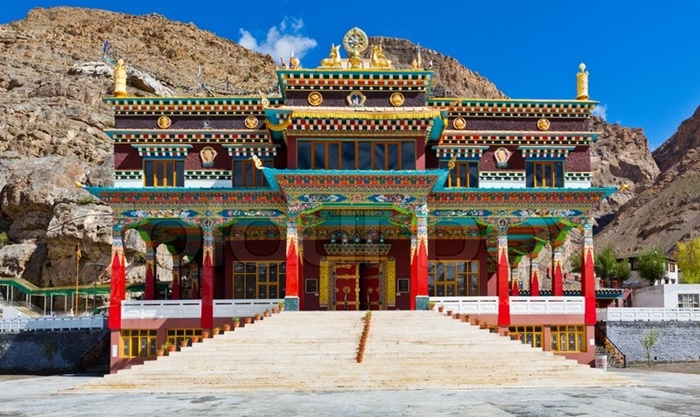 If you are traveling to volunteer in Palampur, then the Tashi Jong Monastery is just a few minutes drive away, and you have to visit this picturesque destination. Home to the Drugpa Kagyu tradition of Buddhism, this monastery is one of the schools of Kagyu tradition established by 8th Khamtrul Rinpoche.

Apart from being a monastery, Tashi Jong is an excellent craft emporium, where Tibetan artifacts are available for you to take back as souvenirs. 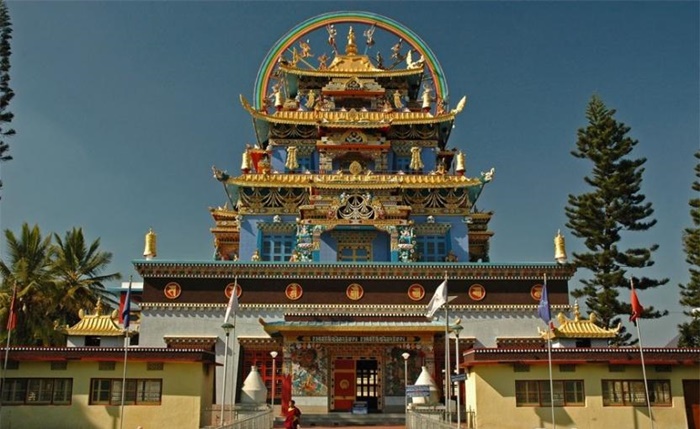 There are over 7,000 monks and students at the Tibetan monastery.

Apart from the calm and peaceful surroundings, there are shopping centers near the monastery where you can shop for traditional Tibetan items like costumes, statues, carpets, jewelry etc. 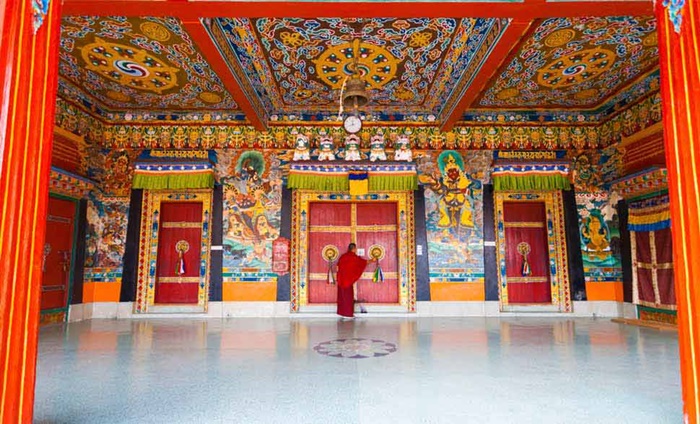 Sikkim is highly influenced by the Tibetan culture, being at the Indo-Tibet border, and there are several magnificent monasteries adding glory to the little state.

Located at a distance of 24 km from Gangtok, at an elevation of 4,900 ft, the monastery acts as a retreat center with  luxuriously sprawling green landscape, a mild weather and smiling faces of the monks. The best time to visit Rumtek is during May-June when they celebrate Tibetan New Year.

Buddhism has a charm of its own and spreads the vibes of peace and happiness. If you are traveling to India – the land where Buddha attained ‘Moksha’ – you must visit at least some of these monasteries, in order to get a feel of the culture and traditions.

Do share your experience with us, if you’ve been to any of these.

monasteries in India, places to visit in India, volunteer travel in India